Located between the Seine and the municipalities of Balloy and Bazoches-lès-Bray, in the department of Seine-et-Marne in the Île-de-France region, the Champmorin site is located in Bassée (section of the Seine valley with extensive wetlands) and extends over an area of more than 171 hectares.

Since the early 1980s, the Bazoches-lès-Bray quarry has been exploited for its deposit of alluvial sand and gravel from the Seine by the companies Lafarge granulats and GSM.

In order to preserve and restore biodiversity, the former Champmorin quarry was returned to nature in 2001 and its management entrusted to the association of naturalists of the Loing valley and the Fontainebleau massif (ANVL).

Over time, different sectors have been redeveloped, thus forming a mosaic of environments of ecological interest: meso-hygrophilous meadows, reedbeds, wooded areas, islets, ponds, etc... The restoration of these diversified habitats has encouraged the re-establishment of many species. of heritage interest. The site is particularly of great ornithological interest with the nesting of many species at stake.

Thus, in 2016 this former quarry was qualified as a "Natural area of ecological, faunal and floristic interest (ZNIEFF)".

Maintaining the openness of these environments being important for the presence of many ornithological species, the maintenance of the site is a job that requires considerable time and effort. 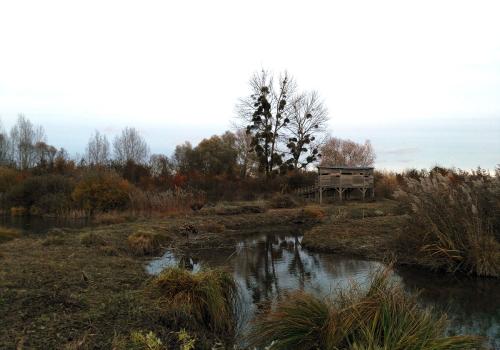