While I was determinig material collected in the quarry, I found five rare and endangered species of spiders. The first one, which you can see on the picture, is Oxyopes ramosus – a lynx spider, which is associated with open areas like steppes or heaths. In the Czech spider red list, it is classified as nearly threatened. The second one is a small orb weaver, Singa nitidula, which can be found on moist places and is also categorized as nearly threatened. The next species, Centromerus incilium, is a very small sheet weaver, which can be found on steppes, sunny slopes or in dry deciduous forests – indeed, its Czech name means “heat liking sheet weaver”. It is categorised as endangered. Another endangered species is Arctosa leopardus, a wolf spider which lives on banks or wet meadows. And our best discovery is an incredibly cute and rare jumping spider, Attulus saltator, which is also associated with sandy open areas, steppes and open deciduous forests. In the Red list, it is also categorized as endangered. However, since 2000, it was only found six times, and in South Bohemia, it was found for the second time ever! And for all these endangered species, it is the first finding in this quarry. 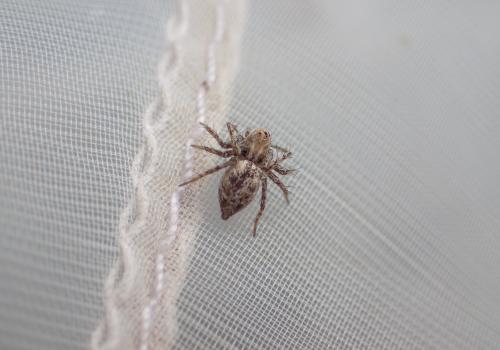